I saw his ghost the other day, I swear 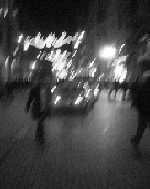 -
Yesterday, whilst walking the streets of Glasgow from one appointment to the next, I walked past GOMA and saw Adrian Borland. Just like that. He swept past me, dressed in black and a bit taller than I remember, but it was him. He looked good, a bit like he was in this picture. I did that thing, you know, where you stop in your tracks and your head swings back over your shoulder to steal a second and third glance. You risk it, in the name of confirmation. It was him. Except, of course, it wasn't. For I'm not losing the plot, I swear, I know it wasn't really Adrian, for reasons that are well known, but it was uncanny, the likeness. For someone to look so like him, to be his double... it made me both smile and flinch. It was a clutch of strange, contradictory emotions. I felt compelled, upon returning home, to dig out some old CDs of his criminally underrated band, The Sound, and remember him as he rasped and bellowed those cutting lyrics, as well as how he looked. That will be twelve years in April, an untimely and tragic event at Wimbledon railway station. He was just 41 years old when he decided it was time to say goodbye. Adrian be.
-
The Sound - 'Winning' (BBC live version) (4.10)
-
This is the place of endings, a kind of Brittle Heaven. But where is a useful place to begin?
-
Posted by Colin at 09:28