An enemy always equals an adorer 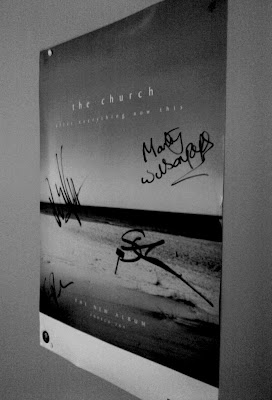 -
And so it all started, in our little town, as it meant to go on; in hushed reverential tones. I do remember the need, the urgency, to get to this place, to 'break for the border', some 176 miles or so away in a place called Leeds, England. It was a spontaneous round-trip to pay my respects to the esteemed visitors from over the water, some ten thousand miles away. It was a low-key affair. Not a sell-out. There was minimal fuss on a stage that seemed to be looking ahead to a peaceful retirement. Around the venue, it was men, mostly men, just like me, who had seen their better years come and go in a fell, badly-timed, swoop. Their ancient cotton trophies, with a few holes here and there, a dusky black colour now a washed-up grey, pulled over swollen torsos and inflated bellys, and hair a little lacking where it matters most. Notebooks in hand. Glasses twitching. Beards stroked. Just waiting for the beginning. And these men, just like me, who had grown-up with Oceanic sounds in their ears, were fading backwards, for at least an evening, to a time when a simple chord from MWP's instrument and a deepened, story-told, lyric from SK could make your tiny heart shiver, quake, explode. That night of magical numbers, the Twenty-First of February Two Thousand and Two, they opened with this song and it was met with open mouths and held-in breaths. Drinks put to the floor. And the quietness... there was a respectful quietness that I have never heard at any concert before or since. So hush now, all youse, and dare to listen to this beauty.
-
The Church - 'Radiance' (live) (6.00)
-
After everything. Now this. Something to buy.
-
Setlist: The Church @ 'Break for the Border', Leeds, England, 21-02-02: Radiance, Comedown, Song for the Asking, Buffalo, Under the Milky Way, After Everything, Chromium, Myrrh, A New Season, Numbers, Night Friends, Electric Lash, Swan Lake, Metropolis, Encore: Magician Among the Spirits Encore 2: Hotel Womb, Constant in Opal.
-
Posted by Colin at 14:03