I grew up believing in people who tried 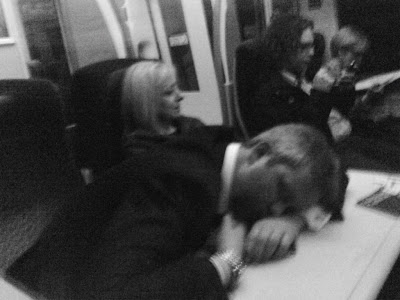 -
Your body is your weapon, these days, as your words no longer hurt me. And, so, it's that time at the traintracks. Again. A drunken suit, looks a bit like a younger, more disheveled, Robert Palmer, sprawled over the table. 'Smells like a brewery', as she across the way would say, with a gin-soaked, fuzzy-felt, grin. There are interesting cufflinks on display, Pixies-related merchandise, I foolishly surmise. A clutched Blackberry won't save him, as it has been dropped once too often already. Cracked and worn, like his beaten liver. That's all directly in front of me. Over the aisle, on the left, is Geoffrey Archer's body-double, UGH!, a battered briefcase glued to his lap with a bruised-looking Daily Mail sitting on top. And then up a bit, again over the aisle, is the River Cottage guy, you know, with the name no one can ever recall. Not Specsaver spectacles, Cadbury's curls and a Home Counties accent. He has expensive headphones in, always, and an XL Twix slammed in his mouth in an uber-suggestive manner. The conductor is totally chancing his arm, getting over-familiar with a stick-thin beauty in fading denim shorts and sheer black tights. Housewifes are in this four-by-four too, and they sit and incest-joke about sprawled cufflinks guy whilst trading mobile videos of the grandkids they'll never see who reside on the other side of the world, far-far-away. Technology, you see, it can change everything and nothing. This distance only from ourselves. Uh, anyway, this is a great song. You should buy it. And don't get on a train drunk. Ever. I will only see you with my camera-shy peepers and tell the Stepps-bound tale, I swear.
-
Underground Railroad - 'Russian doll' (3.48)
-
Off the rails. Buy a ticket. Meh.
-
Posted by Colin at 10:48