And there were no bounds 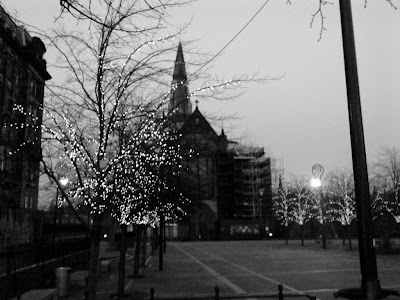 -
'Oh, give me this day....'. It's another form of music, with an epic poetic purpose only heard in tears and whispers; and it is captured by a chance meeting, a brief interlude of reassuring clarity that you are not losing your grip on life at all. No. The truth reveals itself with a certain distance offered. And, really, it's exactly the right kind of sound for moments in the wilderness, like these we see before us now. Yes, on a crisp Spring day, a bedsheet of memories tells it's own sorry tale and is enough to send you running over bridges and water, to re-visit the previously known territory of hope and longing... to move it along... and on... there is just something about the sea-cliff drama and the tight-wire tension that exists in this piece of music. It jaggers and shakes and curls itself around you. You are wishing that the single-held note that goes on and on and on would just fade out and tip it's cap as it leaves. To give you some peace, as your ex-lover promised. Yet it continues to a frenzy, literally dripping down the back of your neck, a coldness engulfing your pores as Rupert takes his place in a steel-cased heart. And the 19th Century imagery of the worlds imagined is matched only by the sheer desperation of the way Simon Huw Jones projects himself into the stage production being played out before us, obviously with the lights held low and those white shirt sleeves drooping and swaying in a bathed red light. It's simply stunning. This music. It breaches those false borders between genres, what you might think of as 'post-punk' or 'goth' or 'alternative', and what you always assumed was 'opera' or 'chamber-pop'. I'll take it all on, anyway, this connection to a mood and a desire.
-
And Also The Trees - 'Prince Rupert' (studio) (4.38)
And Also The Trees - 'Prince Rupert' (live) (4.53)
-
Their glorious non-cuddlecore (and yet hopelessly romantic) album, 'Farewell to the Shade', is near impossible to locate at a reasonable price so this has to be an acceptable alternative, I suppose. And the main event is still to come. Dream on, soulghouls.
-
Posted by Colin at 20:21