For they get the better even of their blunders 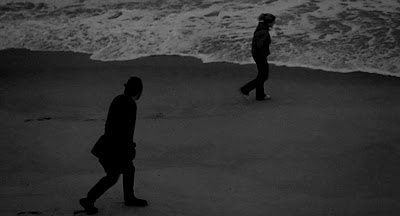 -
So you went out to an unfamiliar Montauk searching for something other than yourself. But what did you hope to find in that particular wilderness... aside from an empty beach in February and a girl with ever-changing coloured hair? Her footprints spiral in the sand, yes, and they will happen to dissolve in a lost time as suddenly as they once appeared. This is the just way of it, as you all know, and those memories - those itemised Durkheimian totemic entities that you scrunch up your bleeding eyes so harshly for - well, they should just be put away for another time, I fear. And was there anything else to find out East, at the end of the forgotten line? This is not some game, you know, it's just a beginning and an ending wrapped into a drunken message where she screams at you, in a confusing, silent, apathetic rage, 'I've moved on, and so must you'.
-
David Sylvian - 'Brilliant Trees' (acoustic and live, Berlin, 03-09-95) (3.49)
-
Hard won wisdom. Over three years. Just erase me. Aye.
-
Posted by Colin at 22:38