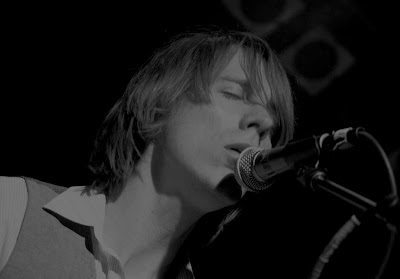 -
Where were you? It is everything good and right and effortless; and yet this fleeting moment is derailed and distorted via cheap cellphone CCTV. Beauty ill-defined; a star of the age is uplifted and the essence of an embodied, shuttered, memory bruises a tired heart. Come closer, for he is destiny as imagined in some other world, far from this palatial bothy. A scolded sting to those crumbling services, positioned on the outer edges of such lucious, golden lips. The sketched, swollen eye nodding towards a distant lens reminds you he really 'means' it. It's time to go home, across the sky miles, to what you once knew as comfort and joy. He is just for you, tonight.
-
Shearwater - 'I was a cloud' (Session Version) (4.18)
-
Home / Record / Tour - Shearwater play Stereo, Glasgow, on Sunday April 1st. No joke. The new album, Animal Joy, is out now on Subpop. The photo of Jonathan was taken by myself at a show at Neumos in Seattle, December 12, 2008.
-
Posted by Colin at 12:45 2 comments: 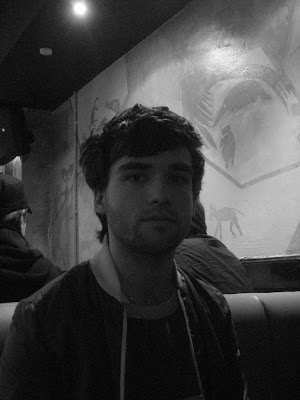 -
Gasp! So, the third record is finally in the making. Hurrah! And, if you are very quick, you might still be able to purchase a 'special solo performance' on Skype. ;) And, even more good news, this guy has a new record out at the end of May as well. Chris and Mark working together? OMFG. Yes please, Santa. Make it happen.
-
Chris Garneau - 'No more pirates' (live) (3.13)
-
Love Zombie Central. Yes, I was lucky enough to interview and photograph (!) Chris in May 2007. He played a show at this place, supporting label-friends Xiu Xiu. He was stunningly awesome, whether speaking or singing. Or, actually, just sitting still for a photograph... <3
-
Posted by Colin at 21:44 No comments:

The cunt sits at his desk and he's plotting away 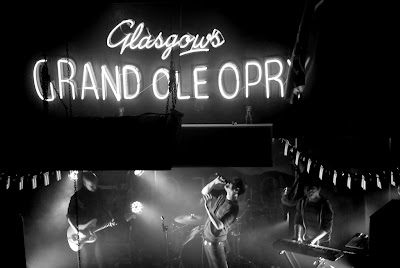 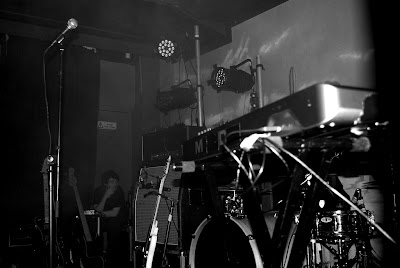 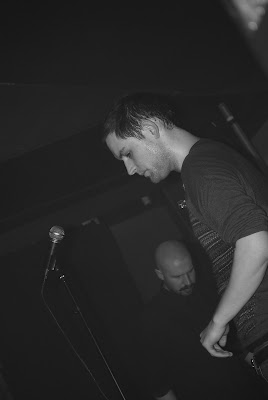 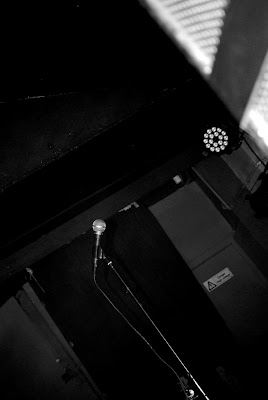 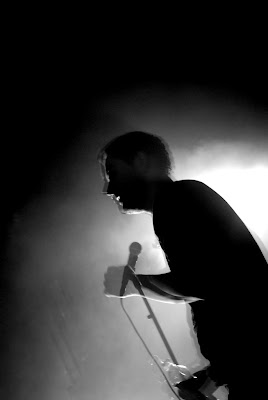 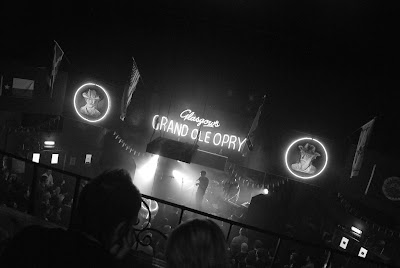 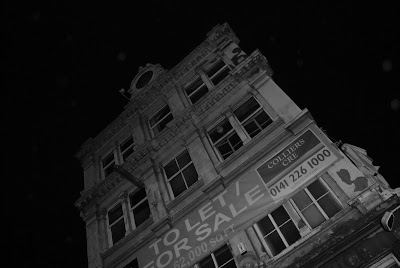 -
The Twilight Sad, @ The Grand Ole Opry, Glasgow, 09-02-12
-
It's about loss and death, the hipstah boy with a sharp haircut and letterbox-framed glasses, ponders. It's about past mistakes and associated bitter regrets, the petite girl with a heavily inked back whispers to a friend. It's a homage to post-punk and the memory of Curtis, the group of lads at the bar bellow like horses on heat. It's a necesary step change and shift of gear, argue those in the know, who are close to the band. It's a little too cold, claustrophobic and one-dimensional... I think (and all the better for that, of course). But it is a fucking grower of an album, that's also quite certain. Debates rage. Differences are aired. The record, 'No One Can Ever Know' (Fatcat, 2012), is not long out and already loose words fly around that cul-de-sac called the internet like Aldi plastic bags in a West coast hurricane. As for the show; well, it's a nervous opening night of the tour and Glasgow calls out for their assumed local hero, James Graham. He commands the stage and a dazzling multi-coloured, strobe-heavy, lightshow does indeed create shadows of a certain Stretford local and the voice matches the carefully-placed picture frame, when the technical difficulties are resolved. As would be imagined and expected, the set is mainly populated by tracks from the new long-player but a good half dozen songs are taken from earlier releases; including rather different (keyboard-enhanced) versions of  'Cold Days in the Birdhouse' and 'At the Burnside', to these muddled ears at least. In that odd sense of misplaced symmetry, however, the set opens with the new album closer - 'Kill it in the Morning'. It's a pounding, relentless beginning and the set continues in this styled and somewhat repetitive manner. Indeed, the lack of variation in tempo, mood and positioning is sorely felt; a foray into the other strands of what this band can do (and, yes, does so well) was missed. For example, anyone who has heard their live, acoustic, interpretations of songs like 'Half a Person' or 'The Room' might appreciate these words. But, to be fair, this is perhaps missing the entire point of the show; it's thirteen songs delivered with minimum fuss and architect precision, all shaped and moulded by the keyboards and drums, as well as the finely-pronunciated vocals of Graham. To be sure, the guitars are not exactly redundant or vanquished in this live cowboy show at the Grand Ole Opry; more like set to the touchline to cool down and reappear later in the last quarter. The songs below were clear highlights, as I heard them, but a special mention must also be made for the classic 'I became a Prostitute'. If the band have a signature tune this must surely be it. Tonight they parade at the Queens Social Club, Sheffield; expect a storming of the barricades.
-
The Twilight Sad - 'Alphabet' (6 Music Session Version) (4.17)
The Twilight Sad - 'That Summer, at Home I Had Become the Invisible Boy' (4.48)
-
Band / Tour / Label (with thanks to Matt Turner/Peenko)
-
Set-list: Kill It In The Morning; Don't Move; That Summer, at Home I Had Become the Invisible Boy; Dead City; Reflection of the Television; Alphabet; I Became a Prostitute; Sick; Another Bed; Cold Days From the Birdhouse; Nil; And She Would Darken the Memory; At the Burnside.
-
Posted by Colin at 12:46 5 comments: 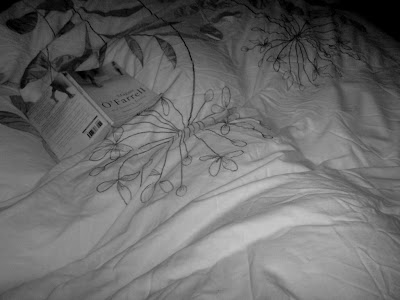 -
'Ostinato', he urged. An uptight focus paired with singular direction; tears, pain and stubborn mentalities carved into the missing timbre floorboards. Another time escapes, your dacha in the frozen cantata wilds. Heads nod and give way, to a clef misplaced years ago. This looped recording process needs no summer daylight, oils or otherwise, scratching at droned soundboards, fading candles and engineers who know their place only too well. Such inability to sleep or to forget; reflections of self within post-shower puddles of sweated condensation. A captured piano lands a fatal blow in ebony, parched in the distance; whilst drums breeze and wallow through the glissando landscape, from a gallery where 'children stare with heroin eyes'. Guitars fall in and out of step, battered and weeping with the sores of polytonality and scowls of bewildered joy. Scattered throughout this tombstone apartment, his retiring voice resonates, remembers and folds. The guilt and the grieving ends soon, it is written in glee. And, to be fair, he never claimed to be perfect; this deceptive cadence. He never even claimed to be the kind of person who could put one foot in front of the other, let alone one word or note that might grace a European popular hit parade. Making no sense at all, perfectly, mistakes in rhyme and reason as we grow up, whatever age you might have been when the tapes rolled. But, why-oh-why, do we make the same errors of circumstance time and time again? It's enough reason to bow out, come the label-induced curtain coda. Pushed or fell? The one who ultimately knows will never speak, lest the illusion be revealed, and in this truth lies the root beauty and the ugly finale all at once. Encore, at last. The time has come, in edited formation.
-
Talk Talk - 'After the flood' (outtake) (4.14)
-
Within Without, you. Something to look forward to (Spring 2012).
-
Posted by Colin at 23:44 No comments: