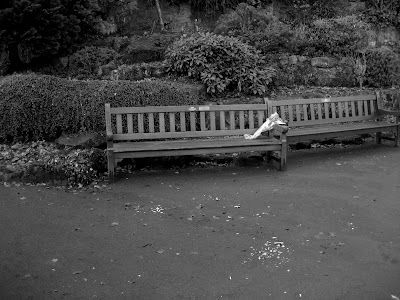 -
It was a scene fitting for the mad snow of this late-afternoon day. Outside of Tivoli, on Stockwell Street, a young couple arguing. Furiously. The basis of this public shouting match being her alleged indiscretions with a known rival. The boy was beside himself, clearly caring, utterly drunk. Amongst the rage and swearing, his cheeks were puffy red, tears glistening. The girl was, I sensed, a little unfussed, but certainly not keen to air this private matter in such a public location. It was a confrontation of the heart, fuelled by some kind of 40% proof tipple. He wanted answers. She just wanted off the streets. And my young charges asked me what was going on. I just said to them, I admit somewhat unhelpfully, rather cryptically, 'Sometimes you just know when it's time to say goodbye', and whilst I shuffled them up the road to wee Tesco, I thought of this song - this version of this song - and, well, the couple who were occupying centre-stage, especially him. The boy with the cheeks, the tears and the heart in bits, not scared to let it show.
-
Marc Almond and Gene - 'Say hello, wave goodbye' (live on 'The White Room') (5.18)
-
Posted by Colin at 23:45