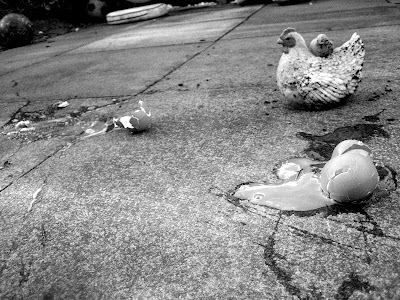 -
No great musings today. It's a day of rest after all. But I was wondering last night, in that 'am I asleep?' or 'am I awake?' moment, where would we be without the distinctively Melbourne-flavoured music of Josh and Joel Meadows? I mean, perhaps not as globally influential as Liam and Noel, in terms of brotherly pop, but they certainly got on a lot better than the Mancunian hosts of a joke Pinky and Perky show. True, they were only around making music as the 'Gliders for such a short time, relatively speaking, but they put out some really great 7" records and this was one of them - 'Letter from a lifeboat' (1992) - affectionately known as Sarah 63. I think, for me, the reason I'm kinda in love with everything The Sugargliders ever did was because of their wonderful accented Oz vocals and finely-picked acoustic guitars, against a backdrop of some really nice imagery in the lyrics as well. I guess that's the reason why. Also, a few of their tunes were, shall we say, rather influenced by the Brisbane 'striped sunlight sound' of The Go-Betweens, a song like 'Aloha Street', for example. I'm still hoping, one day, perhaps at a party or just some kind of function, somewhere, that when I randomly mention The Sugargliders to a drunk person who is pretending to be interested in what I have to say they won't assume I'm just talking about these wee cute things... but then again, being able to glide through the air for over 100 metres is pretty impressive and certainly worth a ten-minute conversation. What am I going on about? I guess this is just me saying thanks Josh and Joel for making the kind of music that makes everything feel ok, a bit worthwhile. This is my own (love) letter from a lifeboat, otherwise known as a certain cafe in Glasgow ('eclectic pop' is an apt description for what is currently being played, by the way).
-
The Sugargliders - 'Letter from a lifeboat' (4.18)
The Sugargliders - 'Aloha Street' (2.15)
-
You won't discover that much about Josh and Joel Meadows, out there in the interweb world I mean, but you can try here - for they went on to form The Steinbecks after The Sugargliders caught the breeze, and this new band also released some pretty great records that are certainly worth looking out for. In fact, I might post some Steinbecks material at a future date (you just never know).
-
Posted by Colin at 10:23