Those books that you pose with are more than antiques 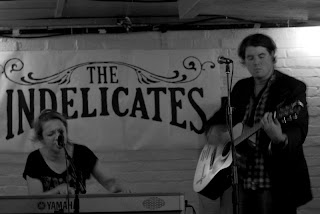 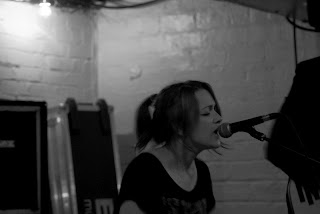 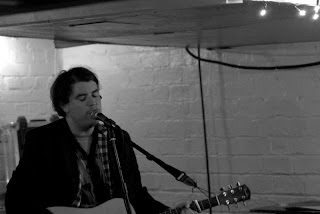 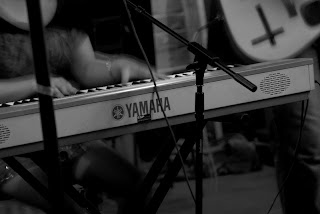 -
The Indelicates, with support from Dave Hughes and Lou Hickey, @ The 13th Note, Glasgow, November 3, 2010.
-
This was always going to be a very fun evening, but the show was really something else. A DIY gig organised by fans for fans. Bliss. After very able supporting sets from Dave Hughes and Lou Hickey, Julia and Simon Indelicate take the, er, 'stage', at the 13th Note and, with the 'record' button firmly pushed down, they launch into a full outing of new album 'Songs for Swinging Lovers'. It's hard not to be very twee here but it really does restore your faith, somewhat, seeing a (lovely) boy and a (lovely) girl playing so well together, with genuine feeling and meaning and humour. The music is pitch-perfect, the lyrics sharp and well-observed and the between-song banter worthy of a late-night Glasgow pub (where the punters have read up on their Derrida and Foucault, of course). Highlights from the new album would certainly include 'Roses', 'Be Afraid Of Your Parents', 'Sympathy for the Devil' (no, not that one...) and 'Ill'. The new songs work so well in this stripped-down keyboard and acoustic guitar format, letting the lyrics and their delivery become a focus. After the album is contractually delivered, literally, requests are encouraged, and requested, and alongside the wonderful closing anthem that is 'We Hate The Kids' ('thank-you and goodnight!') it's the song below that really hits home for me, allowing Julia to kill it softly, in a fucking beautiful and amazing way. What can you say - it's a wonderful night in rainy Glasgow and one - shudder slightly now - that will hopefully be repeated for the promised forthcoming David Koresh concept album. Simon has promised it so it'll happen for sure. The Indelicates are, indeed, worthy biographers.
-
The Indelicates - 'Sixteen' (3.39)
-
Go pop round for a cuppa with Julia and Simon. And buy some stuff! This is the scene to be seen in, you fucking hipsters.
-
Posted by Colin at 08:07