When the clocks go backwards, it's a step in the right direction 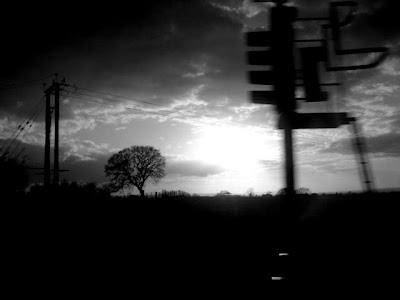 -
I will call it as I hear it, of course, but this will not be a remotely objective review, if such a thing even exists. After all, this is about Bobby Wratten and Beth Arzy. Comrades. Troopers. Lovers. Friends. And if you believe their label, Elefant, then this is the end. This is the last Trembling Blue Stars long-player to be recorded and released. Ever. There will, however, be one more EP to follow, a continuation of 'Cicely Tonight Volume 1', which is included here as part of, or at least associated with, the full-length album 'Fast Trains and Telegraph Wires' (Elefant, 2010). And you need to believe the record label at times of crisis like this, right? So after, one assumes, 'Cicely Tonight Volume 2', the Trembling Blue Stars are no more? Really? I mean, really? That's a little hard to fathom and grasp. The Field Mice, no more, and with hindsight and after a glass of red wine or two and a long, serious talk, you can appreciate why. The Yesterday Sky - just one song on an 'International Pop' EP (see my 'current obsession', top right corner) and the curtain was firmly drawn. Northern Picture Library, game over, almost before it began, with those swashes and flurries of keyboards and synths. And now Trembling Blue Stars... nothing? Gone? I know, I know. No one has died. The rumours of a fire in the hold are untrue. There is no mass panic on the streets of South London. But... but... it was hard enough accepting that Bobby would never play live again, let alone this fatal news. The end. Weep. However, I refuse to believe, as will countless others, that Bobby is going to do some kind of Hollis vanishing act. Beth, his Blue Star and more, the shining other half, wouldn't let him, for a start, please? Surely? Music is the man. It bleeds from him. His pen, her handwriting. That was the deal. The evidence of love, and bold ideas, is surely here, on the eighteen tracks that make up both album and complementary EP. In total, and no surprises here, this is an intense, moving, sophisticated collection of great sounds and songs. A fusion of traditional, melodic songwriting and using technology to create ambience and riff in perfect measure. It is wonderful, if not a little 'chin-hits-floor', to hear the crisp and distinct vocals of Anne Mari Barker-Davies on a couple of tracks, occupying backstage on 'Cold colours' from 'Fast Trains...' and frontstage on the Eno-esque 'The lowest arc', from 'Cicely Tonight'. It sounds just like old times, but with the (personal) shit all pulled together and some really nice Robert Smith guitar chords in the mix as well. Cath Carroll also features on the album, guesting her distinctive deep-layered vocals on the bossa nova tinged (no, really) 'The imperfection of memory'. It works perfectly and is an inspired and challenging pairing. Another noteable is the inclusion of a cover of The Dream Academy song 'Not for second prize' (from their 1990 WEA album, 'A Different Kind of Weather'). Bobby's version is even more atmospheric and poignant than Nick's, which is really saying something - it chokes you hard to hear these lines, in the context of the news... 'Hard to find a way / to say goodbye / And yet the final kiss betrayed it'. So, if this is a final long-played kiss, from Bobby and Beth (as well as Keris Howard on bass and Jonathan Ackerman on drums, of course) then as a collection of songs it's the least painful kind of goodbye you could possibly hope to have to accept. It's a beautiful sixty eight minutes that's just over far too quickly. I implore you to buy this album, and everything else touched by the hand of Bobby. For many of us, of a certain C86 age, indiepop rank and emotional disposition, he has given us a consistent and reassuring soundtrack to chart our lives and loves, the disappointments and the heartbreaks. And the fun. For that has always been left out of reviews and commentaries, the playful side of Wratten. If you peek and snuggle up, you can hear him, I assure you. And he really is calling out to you.
-
Trembling Blue Stars - 'In arrivals' (4.19)
Trembling Blue Stars - 'The lowest arc' (4.59)
-
Trembling Blue Stars can be found here whilst Elefant, as a label, are probably feeling a bit miserable over here. You can pre-order 'Fast Trains and Telegraph Wires' here - it's out on November 22, 2010. Weep. Sigh. Weep. Etc.
-
Posted by Colin at 02:23