'Something dark will happen to them anyway' 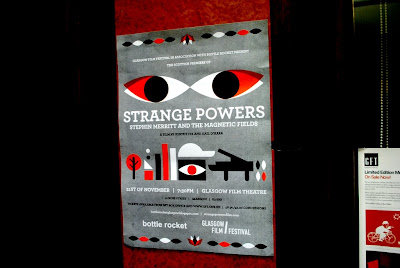 -
'Strange Powers' (82 minutes) (2010). Directed by Gail O'Hara and Kerthy Fix. Distributed by Variance Films. Featuring Stephin Merritt and The Magnetic Fields.
-
Apparently, 'the Cole Porter of his generation', Stephin Merritt, is best known for his 'memorable melodies, lovelorn lyrics and wry musical stylings'. So the post-it note 'plot summary' tells us. And there was silly old me thinking he was just a fucking genius? I mean, I guess the details are important, and the 'melodies, lyrics and stylings' are crucial to his relative success, but in this deeply ironic, and at times painfully revealing, documentary what is thrown at us, the audience, centre-stage, is the beautifully twisted and loving relationship that Stephin has with Claudia Gonson, long-term drums, piano and singing bandmate, and self-sacrificing manager, of The Magnetic Fields. In truth, over the 90 minutes or so, it's a hilarious, captivating and, at times, deeply moving (almost frightening) insight into how Stephin and Claudia rely and depend on one another and what happens when this is tested, due to geographical relocation and other matters. For they do - they need each other. Stephin clearly needs an organiser, and someone to argue creative content and detail with, whilst Claudia needs to feel she is guiding 'talent' (that is, her friend) and thus places her fate and destiny in the hands, largely, of the work and creative output of another. And that other is Stephin. It's a strange watch this film, all told. It's partly factual and chronological, partly stories, anecdotes and extreme sarcasm and 'irony'. I don't think anyone watching this could ever tire of Stephin's dead-pan, comic, delivery of lines that destroy those around him as well as himself, all in the name of not being 'serious'. Or rather, being serious in the futile attempt of not being serious. And yet, oh the paradox, The Magnetic Fields make deadly serious music, as we all know. And Stephin is a serious worker and musician, that comes across very clear (if he can find the right gay bar to hang out in to write his lyrics). Like other members of the audience, I laughed a lot during this screening, in Glasgow as part of the annual Film Festival. Mostly, the laughing was at Stephin's self-deprecation or his piss-taking of those around him, but also it was those moments where his 'audience', in his day-to-day interactions, reacted to his words, ways and... well, his 'strange powers', I guess. His move to LA features heavily in the film, later on, as does the mechanics and process of the magnum opus that was '69 Love Songs' (Merge, 1999). If you are familiar with the work of his band, or Stephin as an individual who is, in equal measures, baffling and charismatic, then you'll enjoy this documentary a lot. If you are new to The Magnetic Fields, or care nothing for them at all, it's still a pretty unique insight into the 'creative process' (gag!) and how random ideas or notes in diaries can turn into bug-eyed monsters, with a series of unfortunate events, indeed, following on. One to watch, for sure. I am a fan. Oh, and a great soundtrack as well, obviously... :)
-
The Magnetic Fields - '100,000 fireflies' (3.20)
The Magnetic Fields - 'I don't want to get over you' (2.23)
-
The official site for the film is here. You can watch the official trailer here. Oh, this unfortunate event is examined in the film, of course, and is well-worth watching (it's a killer morning telly moment, that may involve you hiding behind the sofa or leaking in below the waist places). And yes, the whole 'Stephin Merritt is a rockist cracker for not liking or listening to hip-hop' thing is not ignored, either. Is he pretentious and a bit up himself? Perhaps. But he is no racist, from what we see in this film, and he has more than enough talent to merit his affectations and sarcastic, literary, mannerisms.
-
Posted by Colin at 08:37