When you're ending with diamond eyes 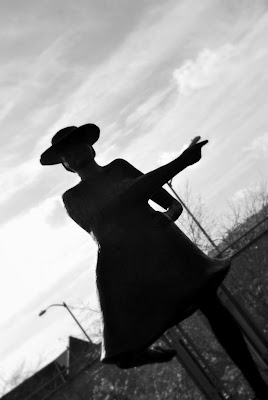 -
I was forced to remember, years ago now, having an awkward conversation with an ex-best friend about the centrality of 'voice' on any given record; how vocals, lyrical delivery if you like, impacted on a song and how gender was so central to this 'performance'. He admitted, a bit sheepish, that he did not listen to much 'female' music (or rather, what I think he meant by this unfortunate expression, was music where female vocals take the centre stage). I was slightly taken aback by this revelation, though, I admit, his honesty made me think hard about my own listening habits and how central gender was to my choices and preferences. Anyway, I was reminded of this long-ago dialogue last night as I played 'Hounds of Love', for what must have been the many thousandth listen, after the visiting children were popped off to bed and the lovely Hendricks made an appearance. It is such a fine album, really. And it prompted the mini-mix below; songs where women, their 'female' vocals (uh oh, biological essentialism! danger! danger!), make the songs absolutely what they are. This is no more so than the included cover version, a pretty faithful take on a Hüsker Dü track from the 1987 'Warehouse: songs and stories' album. The change of gender, in a powerful way, turns a great song into a storming one, in my opinion, and Bob Mould also adored it apparently. As for Sandy, Cat and Laura. Sigh. You can just drift off, melt away to their incredible words and voices, especially Sandy's finely-observed story, told with pitch just so and perfection in every note. She would have been 64 a few weeks back, you know. Shed a tear, or three... with or without the Gin. x
-
Cat Power - 'Crossbones Style' (4.33)
Kate Bush - 'The Morning Fog' (2.38)
Laura Veirs - 'Ether Sings' (3.45)
Sandy Denny - 'Next Time Around' (4.24)
Heidi Berry - 'Up in the Air' (Hüsker Dü Cover) (3.15)
-
As a complete album, it is hard to beat this one. Go say hello.
-
Posted by Colin at 07:30