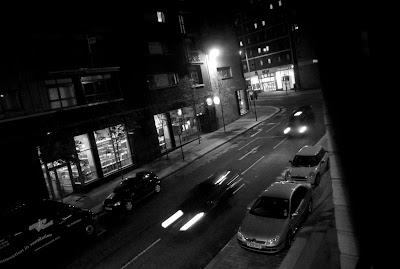 -
Some people in your own or immediate sphere, and you have to realise this, just cannot be understood or reasoned with on any level whatsoever. I think I was thirty one years old, or so, when I finally 'got it'. A late developer, you could say. Or, perhaps, another way of looking at the Rhinehart dice is this: you do not want to comprehend the sometimes contradictory words and actions that spill forth from those you think you know. The accented musings don't add up, let alone the sentence on a screen. Deaf eyes and blind ears, and all that jazz. Whether part of a grand mystique, or just covering tracks, measuring bets even, perhaps, some explanations will just defy themselves. It just gets lost in the multiple translations that are on offer, I think that's the issue hidden under the surface. One step will take you forward, true, but the push to your bruised hips will land you at least three backwards; and so the shuffle and crushing goes on and on and on. And it's also concerned, I would guess, with the gazing towards an uncertain future without remembering what came before it, in the depths of a murky past. That's also critical. 'What I had to say is unsaid / What I had to do is undone', as Mark puts it in this song. This reluctance to action, to arms, is not apathy or fear, you understand, it is just undiluted full-on uncertainty. As another unwritten lyric put it so well, you didn't just want to not kill the hour, oh no, you wanted to salvage the entire twenty four hours as a keepsake. For that's what it is, or rather, what it was. A day in the life of someone who once knew what unconditional love was, how it actually felt; the way it just took over your every fucking pore and soaked your skin like plunging into pearly white waters from a fifty foot craggy drop, on high. With weights tied to your skinny glazed ankles as well. But his dear Katy, you'll remember, passed away and a monster was born; those warm summer days with a gentle, hazy moon after midnight were banished forever to be replaced by a longing for what should have been, rather than what was and came to pass. Tragic, in some ways, but it was what it was, friends. That's how the story went, and ended.
-
Red House Painters - 'Japanese to English' (4.42)
-
'A million miles away from home / and fifteen from a payphone.'
-
As an aside, if you'd like to get your hands on a pretty rare RHP radio session (from August 9th, 1988 - recorded for WREK in Atlanta, Georgia) then you should click here. Incredibly, this was captured just three months after they formed as a band. You can hear Mark, quite literally, finding his early voice and his place in the world, or at least the band.
-
Posted by Colin at 23:23