Those were the days of eternal nights 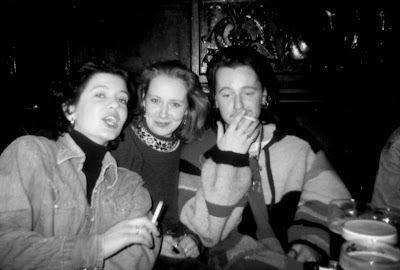 -
"But I remember the way you used to use your eyes
I remember your eyes and your thighs and
The jet black tights you wore underneath your long blue shirt
You bought second-hand to keep you dry on rainy nights
So who told you you were a country girl?
Who told you you were a country girl?
Star-crossed lovers headed for disaster
You took a lifetime on the morning after..."
-
You were always very photogenic, with those well-placed cheekbones and turny-up lips. I always wore terrible Oxfam jumpers and pretended to know how to smoke. And, she... well, P just told amazing stories about shagging Morrissey around the back of the Caird Hall in Dundee after that gig in 1985 (wishful thinking!). But, to be nearly honest, I don't miss Paisley one bit, not anymore. I think it's about kicking nostalgia, and 1988/89, into touch. It's about going forwards, in every particular sense, no? I mean, even G has moved on now, quite literally, to plough his younger fields of Barley. Life can change direction in an absolute instant, make no mistake about it. But, something about this song will always remind me of George Street, Friday night at the Union, and you.
-
The Bolshoi - 'Lindy's Party' (5.45)
-
An album to listen to, now and again. On rainy nights.
-
Posted by Colin at 23:48