Trying to remember the last sane dream you ever had 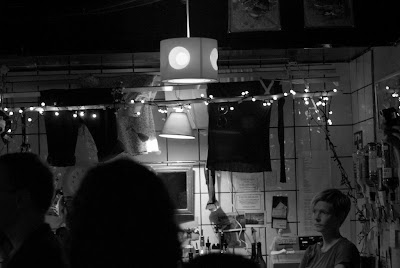 -
Well, just look at this comrades, there are no shambling or even jangling guitars involved this time around. OMG! WTF? Etc. The heavens may well implode. But, to be fair, I did make a firm promise a few weeks ago that these regular Sunday mixes wouldn't just be C86 indie-pop and/or early-90s shoegaze in nature, remember? And so I can now fulfill this bold promise. I suppose you could call this a 'dub'-type of mix (?) but I wouldn't be too sure about that sorely abused, rather hijacked, badge of dishonour these days. It has deep, historical and political connotations, you know, the purists would gaggle, weep and then attempt murder for the sake of musical mummification. Watch your backs out there. Thus, to safeguard my general health and well-being, I'll say no more except this: these are all fucking brilliant tracks whatever genre you want to place them in. Just listen; listen hard, listen deep and listen as if your wee-twee-free life depended on it. More jangle coming soon though, obviously... :)
-
Augustus Pablo - 'Tubby's Dub Song' (dub version 2) (3.40)
Cotti and Cluekid - 'Flashback' (5.52)
Burial - 'South London Boroughs' (5.05)
Eskimo Fox - 'Digital' (4.24)
Lee "Scratch" Perry - 'I Got the Groove' (5.28)
-
Out of all and everything, I guess, choosing this one long-player would be more than perfect to accompany your large glass of Hendricks - with added cucumber of course - this evening. Or is that a touch controversial, I wonder? The album selection, I mean. I thought it one of his best, actually.
-
Posted by Colin at 11:04