Wave goodbye to our thankless jobs 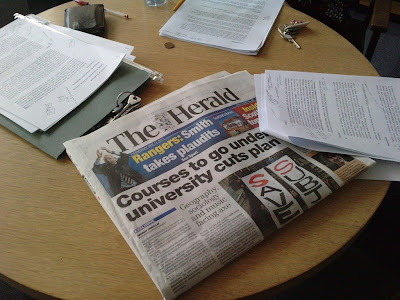 -
Oh well then. We now know where many of us stand, in a non-technological fashion. And, I guess the fight to save disciplines, courses and jobs is very much on, in an immediate and directly-affected kind of way. The 'consultation' period on proposals to shut down four programmes (Geography, Music, Community Education and Sociology) at our 'place of useful learning' runs until June 10th. So, I'm afraid, I'll be more than a bit caught up in all of this 'Save Our Subjects' activity, from both a UCU and staff perspective. And, you know, despite the alluring title, my job isn't thankless at all; I actually love it more than I can ever hope to say and would much prefer not to be made redundant (just like everyone else out there staring this awful prospect in the face). Yes, the temptation to 'get out of this country' is great though, I confess, but I obviously won't, and I can't. The fight is on, as mentioned. Anyway, rather than bore you to a state of permanent sleep with my usual nasal whining and self-pitying anger, I rather suspect I will just limit my postings here, keeping them few and far between over the next couple of weeks. I will be pretty busy anyway, trying to stop this intellectual vandalism, and if I did get polemical on this page I'd just end up ranting or crying - and posting lots of tracks by this band, or perhaps this one. The favourites tend to be comforting in this hour of need, don't you think? In closing, I'll just offer my sincere apologies to the 17.4 readers who make a point-and-click pilgrimage to this, er, shrine (?) on a day-to-day basis and tell youse that I'm personally obsessing about everything Tracyanne right now as she just has a way of nailing that particular feeling (to a second-hand graduation gown) and shaking a really big pointy fucking stick at it.
-
Camera Obscura - 'Let's get out of this country' (session version) (2.46)
The Cryin' Shames - 'Please stay' (3.01)
-
Aye, to smile and blush in the presence of Tracyanne. The Cryin' Shames song is one of Carey's favourites, by the way.
-
Posted by Colin at 20:01