Everything I can remember, I remember wrong 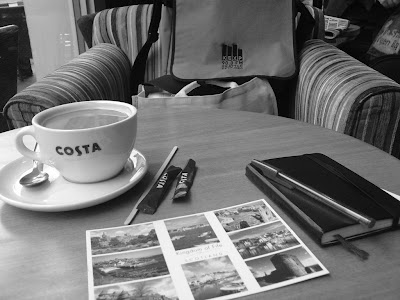 -
If I am being horribly, brutally honest - unusual for me - it's all a bit nerve-wrecking. This. Again. I promise not to go on and on about it for the sake of a few badly-played violins but, you know, I almost completely disengaged from all things interweb. Aye, even Facebook. I still don't really know why. I was just feeling, well, a bit invaded. Not by anyone or anything in particular, just by a sense that I was losing it. I was losing it big time and losing control. I had become a parody of a parody of a parody. My life had become, well, a triple measure of the strongest spirit you can drown in - a large gulp of Jackie Leven, mixed with a dash of H. G. Wells and finished off, literally, with a headache-inducing nip of Withnail, actually. Chin Chin! The thing is. I don't think I ever really got over a particular night, Friday November 2, 2007 to be exact, when after witnessing this band play at the ABC I... well, I suffered (not to be too melodramatic). The detail isn't important. Not now. Suffice to say I had something of a turnaround. In fate, circumstances and possibilities. I thought things might get easier, or rather, not easier but less complex. And they did in some ways, but not in others. That's the way of it, right? The sweet and the sour. Sucking on a lemon. Like that song puts it. Anyway, sorry, the point is that in a non-glib way you do the best you can and get on with it. I don't mean that to sound like such a tired cliche it's a relic in an ancient vault in the oldest museum you could possibly know, circa 1707 rather than 2007. You just get on with it. Life does not stop, it's a constantly jiggled snow-shaker (is that the technical term for those things?), though sometimes the snow is replaced by sun, sea, sky, for sure. Like, the other night. Entirely unexpected, I bought my eldest son his first pint. At a gig (it was The Unwinding Hours at Oran Mor). He turns 16 in January, but is already going on 21. As I approached the bar I asked him if he wanted a coke or whatever. He looked me dead on and said 'A Guinness?'. I met his gaze and said, 'Right you are. Stand back from the bar. Do not tell your mother.' And then I realised it had happened. I had fucking moved on. And it would be my turn soon. Forty years old, at midnight as a certain train rolls into town to play at... the ABC. In five days. And you know what. I am genuinely excited. I need to grow up a bit. And I need to learn to face, to play, The National again. It's an encore that just needs to happen. For 'Mr November' is actually a girl in a red top, staring up at you, with love in her eyes.
-
iLiKETRAiNS - 'A Father's Son' (3.26)
The National - 'Daughters of the Soho Riots' (live) (4.40)
-﻿
Platform 9 + 3/4 is, in fact, over here. Album pre-order here. Oh, and watch this. And feel a little sad.
-
PS, Yes, this is my way of apologising for being so AWOL. Sorry about that. I had reasons though, you know?
-
Posted by Colin at 00:08