In an ideal situation, this will all be over soon 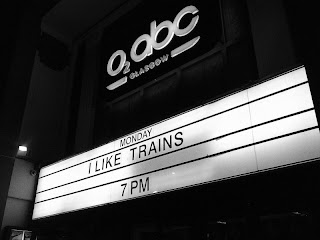 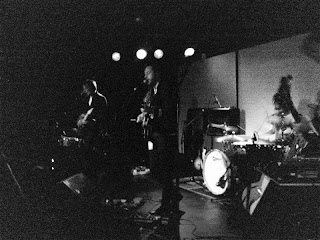 -
iLiKETRAiNS @ ABC, Glasgow 25-10-10
-
'Great God, this is an awful place...' I am left wondering who the fuck would be in a Rock N' Roll band just now? It's a Monday night in chilly Glasgow. The streets are empty, except for the eternally hopeful and the always defeated. It's near the end of a very long month that has lasted thirty-nine steps, and then some. Folks are wanting, waiting, to get paid. There must be something good on the TV. So, hands up who is staying in to wash their hair? Whatever reason or excuse, the venue is close to empty tonight. And this is such a great fucking shame. 'It will be an intimate performance', Alan the barman whispers to me as he passes. And it really is 'intimate', which is both fantastic, in a perverted sense, for us keen punters, but it must be somewhat bemusing and depressing for the band, who have travelled at least 220 miles or so to be here and are now used to a fine and fair reception in Glasgow city, given their track-record in a gigography sense. In truth, it's an all-to-brief set with very few (baritone) words spoken by lead singer and guitarist David Martin between songs; at one point he even states the obvious, with some resignation, by declaring 'I have nothing to say'. With a glorious new album out the very day of this performance, you'd forgive the band for wanting, expecting, a bit more. Those passionate spotters attending, to be sure, do their best to rouse on-stage spirits but you can tell there is a sense of bitter disappointment hanging in the air. It's a straight set with no encore, ten songs and then the empty stage flicks a V-sign up at us. 'A bit Muse like in places' comments Duncan. Hmmm. I'd disagree but can see where the remark comes from, especially regarding the new and more, shall we say, 'accessible' material. This album needs time to settle, the momentum needs to build. Highlights from the evening include those tracks featured below: 'Terra Nova' is an ice-packed classic that never fails to deliver whilst 'Sea of Regrets' is a telling choice for a closing number, in a fade-out robustly kind of way. The 20% chance of hearing 'Stainless Steel' played live seems like inflated odds, if you ask me. It must be hard to put your heart and soul into something when you appear to get so little back, even from the few good souls braving both elements and economy to be here and clap.
-
iLiKETRAiNS - 'Terra Nova' (live) (5.29)
iLiKETRAiNS - 'Sea of Regrets' (5.54)
-
So, as you know, iLIKETRAiNS are out on tour right now and play The Ruby Lounge in Manchester this evening. If you are within a 100 miles radius do attend. Please. The new album, 'He Who Saw The Deep' came out yesterday and you should, without delay, purchase it here.
-
Posted by Colin at 07:01