You send a last balloon 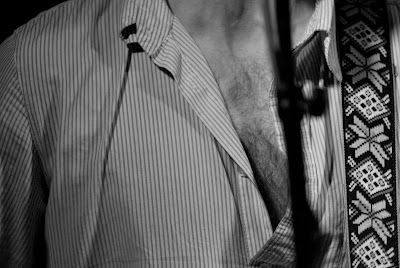 -
It strikes me that the very best shows I have been to recently (and not so recently, in fact) have all had something in common: lead singers that you can just kinda obsess over. I suppose this is the obvious point of it all though, right? I mean, whether it is Emily Kokal (Warpaint), from the other night, or James Graham (The Twilight Sad), from the week before, they just have something that draws you in - you listen, you stare, you blush and get fixated (hence the often-heard expression - What Would Edwyn Collins Do? - replace the name with your own chosen Idol). But it's not a teenage 'kick' thing, exactly, as the years advance it's less all-out adoration and more, well, just a warm glow that you get, appreciating the fact you know these people and have them in your ears, in your life, at least through their music and their shows anyhow. Jonathan Meiburg is #1 in this regard, right now for me. He has a voice that I can very easily obsess over. He also has his own obsessions, the Johnny Rook and fellow winged travellers, and that just means I adore him a little bit more myself (I am hugely attracted to people who do not hide their passions and interests, their own enthusiasm for Subject X just seems to somehow rub off on me). It's that voice though. When I first heard Okkervil River, and more particularly Shearwater, I was wondering how and why Mark Hollis had reappeared. Like a ghost. But it was Jonathan. Of course it was. So, do enjoy this subtle piano and vocal take on the Shearwater song 'Hidden Lakes'. You can watch a studio version here, check out the cute dog, and those JM eyelashes! <3
-
Jonathan Meiburg - 'Hidden Lakes' (solo, piano version) (3.41)
-
Jonathan's band, Shearwater are over here, and the really great news is this: some new recordings are already being made. It doesn't seem long since the 'The Golden Archipelago' came out! They are also heading out on tour with this guy very soon - you may know him - and the first stop is Birmingham, AL.
-
PS. Yes, um, that is Jonathan's bare chest. Taken at The Captain's Rest, Glasgow back in February this year. Any excuse, I know... but he did take his first degree (English) here! Weep.
-
Posted by Colin at 11:29