Well I played the system and created wisdom 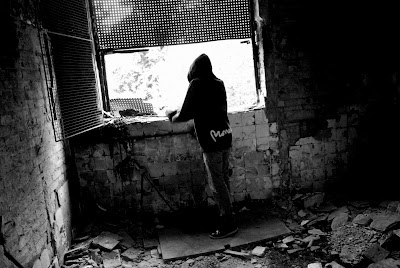 -
Just a quick thought this late evening, early morning that takes us, musically-speaking, about as far away from indie-sweet, hearting, cupcakes, handclapping twee-pop as we can get. You know, if Anthony H. Wilson really did have the sheer audacity to suggest that Shaun Ryder was 'on a par' to John Keats as a poet then I think, if he was still with us today and living in a dodgy part of Glasgow that was littered with empty bottles of buckfast, Wilson would be comparing Gasp to Robert Burns. I really do. Genius isn't the fucking half of it, I tell you. This boy can go out and get 'em. I mean, really, it's like an Honours degree in Sociology dealt out in less than ten minutes via the medium of square sausage, Irn Bru and a week-old copy of the Daily Record that has been signed by Eminem's distant second cousin who actually bides in Shettleston now, since the 'accident'.
-
Gasp - 'New Numerrr' (3.58)
Gasp - 'Educating Puddlegutts' (6.34)
-
You can find Gasp here. And here, apparently (extra points if you can translate the, er, lively interactions that are witnessed).
-
Posted by Colin at 01:31