Surely some revelation is at hand 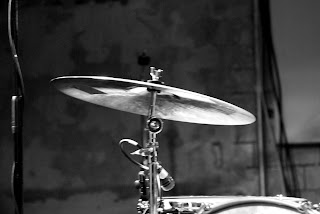 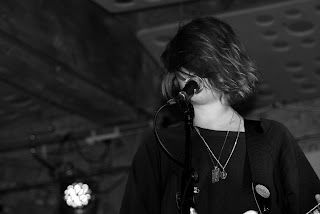 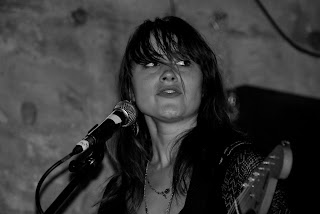 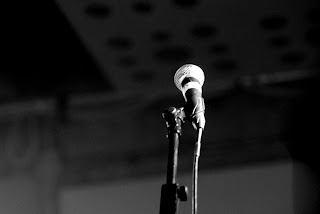 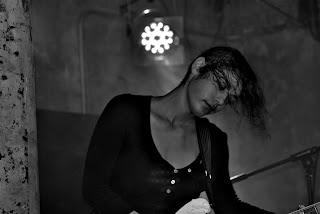 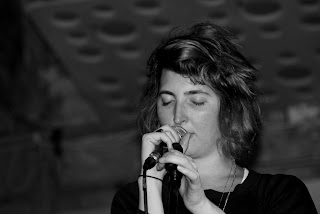 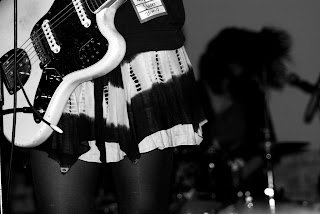 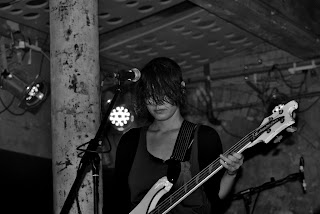 -
WARPAINT, Stereo, Glasgow, Scotland (22-10-10)
-
"I learned courage from Buddha, Jesus, Lincoln, Einstein... and Cary Grant"
Miss Peggy Lee
-
It feels snug and warm down here, in the basement. Much like dipping into a Joan Didion book from the 60's, recently obtained from the Barrowlands Market. You just feel at home, despite the oh-too-loud commentary from Cool Folks to your left and the Jostling Tall Boys in front. And the anticipation for this show is, literally, dripping from the ceiling, in the form of human condensation, before the band even enter, stage left. One thing is certain, the hipsters are in town. You can hear them before you see them, and that is quite some feat as we all know. But, hey, you can't look that cuntish and still not love what's about to be unleashed. New Long Player, 'The Fool' is not out until Monday but it's telling that as it rides out, the masses are singing along, grooving along, like it's a club classic from 1999. So what is it about this dazzling mix of sound? Where does it come from? Well, it's part Young Marble Giants, part The xx, part Slits, part-Slowdive, part Vogue covershoot (it can't be ignored or denied, they look as amazing as they fucking sound - but it's the sound that counts you dicks). The new album is given a fair hearing, along with earlier tracks from the sublime 'Exquisite Corpse' (a statement of intent if ever there was one). What strikes you most over the hour and a bit we are graced with a presence is the staggering amount of confidence they possess as a foursome, the knowing looks across the stage, the gestures of body, the shared moments - just knowing they have this moment fucking nailed. Their happiness and ease with one another, with the audience, is joyous to witness. It makes something of a change from the oh-so-fuckish indie-norm of appearing, in sometimes utterly false ways, to be shambling, nervous and just untogether. This band is a unit, they have their shit tight. Yes, tight, assured, moving to the same beat. And, it has to be said, my God, do they have the beats. It isn't all sub-Cocteau Guthriesque effects, 'space', delay, and soundscapes (gag!), for Jenny on the bass, and Stella on the drums, demand movement and it's evident all around, as well as on stage. The sweat pours out of me, of everyone. Emily, often hiding behind a bulk of strawberry blonde hair, takes on the bulk of vocal duties, but Theresa chooses her moments as well, both favouring a style eerily familiar to anyone that has even an on-nodding-terms relationship with that ill-defined, and rather easily mocked, sub-genre once called 'shoegaze'. Their guitars hark back to such times as well, embracing multiple effects pedals and those shuddering layer-upon-layer-upon layer waves that reach over our heads, stretching to the very back of the room (though Emily does need to remind the mixing desk to pump up bass and drums, tellingly). But as we leave, the masses are still nodding heads and dancing away, remembering the grooves, the beats, the rhythms, as well as the - sigh - hips, tits, lips, power! Yes, even the baked-in-sweat fucking hipsters are dancing. Result, game over, Warpaint. You so win.
-
Warpaint - 'Beetles' (session version) (8.05)
Warpaint - 'Elephants' (session version) (8.57)
-
PS, The new material, I just love, but at Stereo the older tracks 'Beetles' and 'Elephants' just swaggered, soared and swooped. So, take a listen. Now.
-
Warpaint are playing Manchester tomorrow night (24-10-10). But it's sold out, obviously.
-
Posted by Colin at 22:27