Why are you looking so miserable now? 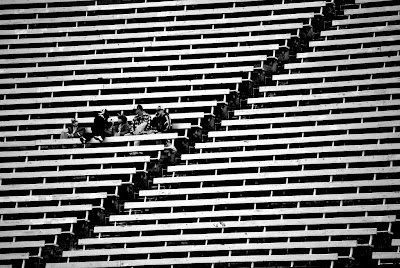 -
Yeah. This is not such an incredible revelation. It's not exactly bordering on the profound or anything like that. But, likesay, I have always wondered if as much thought goes into the songs that are chosen to close albums with as much as those deep, vexed thoughts that are clearly given over to selecting what songs open long-players with, especially on a debut LP offering. You Dig? I would like to hope, and I imagine it is the case, that some serious debating goes on as to the exact order of what 'track' goes where, amongst not just the musicians intimately involved with the recording, oh no, but also those interested parties surrounding the first team, such as management, record labels, PR and so on. The closing song that sticks with me, in this regard, is entitled 'It's all mine' by World Party. Karl Wallinger just seems to completely 'let go', as the song builds to its natural conclusion; shifting from, literally, a whisper to a scream and then back to a fade-out whisper. And silence. His voice, you can absolutely hear this, is edging closer to the drowning abyss from about the first chorus... 'It's all mine, it's all mine, it's all mine... it's all my own fault.' It's an utterly mesmerising vocal delivery, in my opinion, and, yes, I would have written another fucking PhD to have witnessed him recording it live in the studio. Lots of blood, sweat and tears, I imagine, and not all of it his own I am sure. Wine as well, I think, lots and lots of red wine... drunk, spilled, pleasured. You can just picture Karl's mouth, his whole head and face actually, contorting, rasping and spitting to get those words out "just right". How many takes, I wonder? How many takes? On a perfect album, such as 'Private Revolution' (Chrysalis Records, 1986) clearly is, I just don't think any other song would have finished it off nearly as beautifully. Not to be too dramatic about it, of course, but I think it's the best full stop [.] I have ever heard in my entire musical life. What is your own full stop, if you have one? And why? Can I ask that? You?
-
World Party - 'It's all mine' (5.35)
-
A rather flash HQ, of sorts, is located here. This is something from the same long-player to watch. And you should, of course, buy this album. Yes.
-
Posted by Colin at 02:23