I just gotta be your victim, kitten 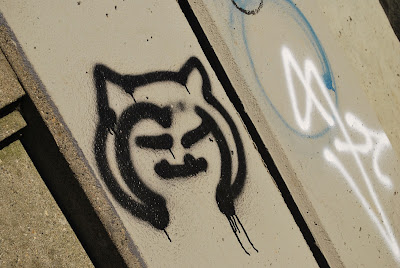 -
A bit like The Horse Flies album, 'Human Fly' (Rounder Records, 1987), anyone I ever played 'Hubba' (Restless Records, 1987) to just adored it. The Cat Heads, a San Francisco band if ever there was one, were an eclectic mix of musicians from different bands floating around the 'scene' at the time, mainly held together by vocalist/guitarist Mark Zanandrea. When they rocked they fucking rocked, with a great sense of anti-cockrock humour, when they played it slow and country-like, especially with Mel Clarin (Donner Party) on lead vocals, they made your eyes go a bit wet and goosebumps emerge. A bit like The Horse Flies album, it was the cover of 'Hubba' that drew me in. I'd never heard of them so the cover was the cue. And it was just perfect. A cute wee kitten staring at us through railings, beneath the cracked pavement. As for the music, I guess you could file it under 'blues, country, pop, folk, rock' and everything inbetween, a kinda paisley underground 'thing'. It defies genre-picking, really. Much of the sound echoes back to earlier San Francisco times, the1960's and an 'aura' (yes, 'aura') of peace, love and serious, serious drugs. I just can't enough of this album and ever since that fateful day back in 1987 I have often judged an album by its cover, or at least taken a chance on buying an album by an artist I didn't know anything about just because it had a interesting or appealing cover. Sometimes this policy works, other times less so. Anyway, the three tracks below are taken from a reunion live show The Cat Heads played in 2006, at the Rickshaw Stop in their home town. If you know The Cat Heads then you need no introduction to their greatness, all three tracks come from 'Hubba' and are the pick of the pops as I see it. If you are not familiar with the band, please give them a go. I think you'll have room for them in your dark and broken hearts, somewhere along the bicuspid valve. As for the one that might finish you off, that'll be 'Lullaby', this song alone should take that bundle of granite and turn it into fluffy pink marshmallow, I hope.
-
The Cat Heads - 'Victim' (live) (3.04)
The Cat Heads - 'Lullaby' (live) (3.27)
The Cat Heads - 'Final letter' (live) (3.37)
-
The band are having a wee nap here. If you'd like to hear the studio versions of these tracks then you can download 'Hubba' here. I would urge you to do so, with a fairly clear conscience, as the record has been out of print for years I think. And good music should be heard, you know? 1987. It was a good year, aye.
-
Posted by Colin at 12:23