You only ever liked the beginning of things 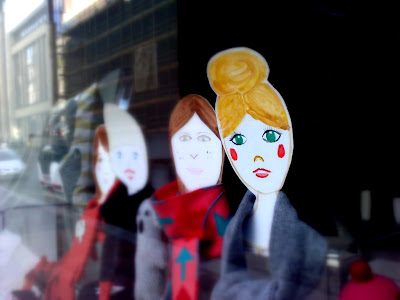 -
It goes without saying that I'm someone who can't wait for Autumn and Winter to arrive. People who obsess about music are usually like that, I find. The harsh weather lets you (quite legitimately) stay in a lot more - in that anti-social way - and play many, many records over and over again. Late at night, red wine in hand, headphones on. However, now it has vanished for the months to come, I admit I am rather missing the warmth of the Glasgow sun that does occasionally appear, honest it does. But, anyway, the joiner came this morning to fix the bedroom window so that's a positive. The stalking elements will no longer squeeze their cruel way into this tombstone of an abode. A drip of rain here and a howl of wind there. The irony. Also, and this is just a quick thought: I think, in watching it all over again, rather slowly, I am beginning to finally understand the complex character that was once known as Mrs. Betty Draper a bit more. That's Mrs. Francis to the likes of you and me now, of course. Her moods, tempers, pouts, tantrums; especially when she didn't get her own way with Don. And then, in later years, with Henry, of course. It's all about dealing with alienation, loss and being alone, isn't it? Retaining control; trying to hold onto something - to someone - that had already left the party, building, street. Her Dad, in fact, is the one who is missing here. I might be wrong, I usually am, but I just wish Betty some happiness, or at least peace of mind - via making peace with that loss. This is a song for her which she might dance with Henry to (not Sally though, obviously).
-
The Springfields - 'Are we gonna be alright?' (2.39)
-
This band has nothing to do with Dusty, in case you were wondering. Her. Him. A soundtrack, of sorts. But she was always my favourite one. And Pete Campbell. The shit.
-
Posted by Colin at 09:46