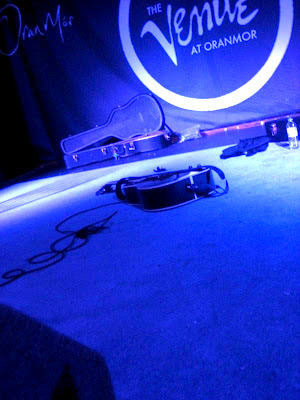 Cameron Crowe: Kris Kristofferson once said, “I write a sad song when I’m happy, because generally when I’m sad, I’m too sad to write a good song.” Where do you stand on the subject?
Mark Kozelek: I’m the opposite. When I’m happy, the last thing that I want to do is shut myself away in a room and write. I generally write when I’m feeling down in an attempt to find some peace and contentment.
-
Exactly this, really. Except 'contentment' is perhaps stretching it a little. It seems too permanent, somehow. Too safe. Peace of mind would be enough, sometimes? And I have always wondered about the song 'Alesund'. A sad song or a happy song? It suggests, obviously, a very distinct geography and kind of space; desiring remoteness in sterile airports, a plush hotel lobby, a city centre gig venue or two. A shared moment with an individual who stands out, picking the spotlight, acting as muse, inspiration for the night. You sing to her, and only her. It also captures, perfectly, the idea of being alone in a crowd, adoring someone close, from afar. Those 'cold bones' needing some warmth. But, once you are invited in, you merely turn your back and walk away into an evening light that doesn't judge you, or want you. The operation of agency, I guess. Like Zorg put it to Bob's horny wife - you deny yourself something you want in order to remind yourself you are alive, you have some control over urges, desires. It's, as ever, a bundle of contradictions and feelings. But these words matter, I think. Anyway, whatever, this is such a beautiful (if shortened) live version, recorded in Belgium, from the recent tour. All nylon strings and delicate arrangements. But, the image... I remember taking this picture with an old camera; one that was effectively stolen from me. That was a lifetime ago, however. It was a cold Halloween night in Glasgow, a particularly emotional one, and Mark had just left the stage, off to the left. His guitar just dropped to the floor, bathed in a blue light. You kinda want to say something to this hero but dare not. Just to shake those talented hands, say thanks for helping me change my life with a lyric from a song or two. 'It isn't real life' was a constant mantra. Well, it doesn't get much more 'real' than a Mark Kozelek song if you ask me. I hope he knows the impact he has on us all? I'm sure he does, Cameron will keep sending him those memos, cards and scripts. It'll be good to see these two working together again - I just hope he gets a line as stirring as 'Dude, fix your fucking face'.
-
Mark Kozelek - 'Alesund' (live) (4.58)
-
Read more from Mark's interview with the film director Cameron Crowe here. Also, Mark contributes vocals and bass to several tracks on the new Desertshore album (released on the Caldo Verde label on November 22nd).
-
Posted by Colin at 12:01