A monopoly on the legitimate use of violence 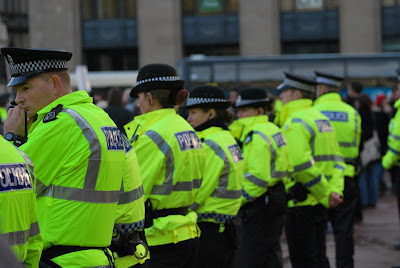 -
I know, it's not very amusing, really, but the more I read Weber (let alone Marx!) and, in particular, the more I listen to a band like McCarthy, the less I understand how we actually put up with what we put up with in terms of the socio-economic world we are forced to endure and play a small part in. In other words, yes, I am having a slight crisis of political (not musical) faith and I'll be taking a wee break from this rather bourgeois indulgence to consider my material options and focus on the things that matter most. And by that I don't mean the forthcoming public sector revolution (shame on fucking you Miliband; what your Dad would have made of it all I can't even guess). Or do I mean that public revolution? No, I think I have to mean a more personal revolution, one involving the people; the good souls. Well, that and possibly, if the news arrives, trying to find another job (along with two and half million other people forming a winding line around the revamped dole office).
-
McCarthy - 'Governing takes brains' (4.16)
-
One for the weekend. Storm those barricades, comrades.
-
PS. Speechless. Open mouthed. I don't know about you, but this song has just blown me apart into a million different pieces. The Horrors are taking it beyond a question of mere 'progression' or 'levels'. They are now wholesome giants in a minature, scaled-down world. And we are better for this transformation, absolutely.
-
Posted by Colin at 06:57