Just a slogan on a T-shirt 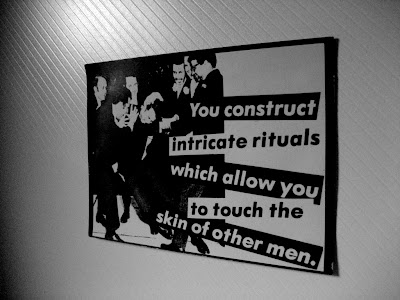 -
There is something, well, persuasive and convincing about these sounds. No? Maus music. It isn't 'forgettable', for me. To be sure, in places, it has those 80s post-punky synth hooks and, in a strange way, they are making out with disco music in the hidden alcoves of the club, kinda thing. A bit hipstah, perhaps. But is that such a bad thing, by definition? There are faint memories of 'classic' Hall and Oates, for some reason. But, this all works, curiously. And that voice. It resonates and stretches down to the depths of a long-abandoned well that is as dry as the Sonoran desert in high summer. Lots of spaces, delays and echoes. It's an immediate anthem, a direct statement of intent, we can at least agree on that. I just love it. And, in addition to the sounds, he's a PhD student in political science at the University of Hawaii at Manoa. It's a CV to die for, really. I am a fan.
-
John Maus - 'Rights for Gays' (2.40)
-
In search of Mausspace / Something awesome to watch ;)
-
Posted by Colin at 09:09